In mid-December, a Pan Am jet liner will lift off from Kennedy International Airport and head eastward for London and Frankfurt with 362 passengers – the largest passenger load ever carried by a commercial jet airplane. The plane, a new Boeing 747, forerunner of super jets of the 70’s, should make its pre-Christmas inaugural flight as scheduled, thanks in part to many prior months of careful, meticulous flight testing during which Hewlett-Packard went along as a working passenger.

HP’s involvement in flight testing the jumbo jets was first revealed earlier this year in an article in FuGHT TEST ENGINEER magazine by J. G. Piersall, an aerodynamic analysis engineer for The Boeing Company. With hundreds of Jives and millions of dollars at stake each time an air­ craft takes to the skies, flight testing of a new aircraft must necessarily be thorough and meticulous. At the same time it must progress according to a tight time table in order to meet the airline customers’ anticipated flight schedules.

Traditionally, hoards of data are collected during a test flight and recorded on magnetic tape. Later, in the test engineer’s office after the flight, this data is analyzed, results are computed and a decision is made as to the aircraft’s flight worthiness. But, as often happens, if one element of the test flight does not go according to plan, the entire costly and time consuming procedure must be repeated.

Boeing engineers sought a method whereby the data could be analyzed during the flight and, if a problem arose, the step could be repeated immediately. But the data are too numerous and the mathematical formulae too complex to permit rapid manual calculation.

Then HP’s 9100A computing calculator joined the flight test team. Small and light enough to be carried aboard an aircraft about to undergo testing, the 9100A easily met the testers’ requirements for size and weight. But more important, the complex mathematical equations used in flight analysis are programmed into the calculator and stored on credit-card-sized magnetic cards.

In one example of flight testing, the big jets land and are braked to a stop as rapidly as possible. Then the “braking friction coefficient” – or the amount of friction between the tires and the runaway surface – is computed. This quantity is then used to compute the distance needed to stop the aircraft in successive runs. Getting the braking friction coefficient formerly required lengthy computations. Now with the 9100A along, the airplane can immediately take off and the braking distance for the next landing will be ready in just minutes.

Other calculator programs allow flight test engineers to rapidly compute position errors (errors due to the location of the airspeed sensing device on the aircraft), the lift of the airplane during stalls, stall entry rates (acceleration of the aircraft when it enters the stall), the amount of drag the airplane has at different speeds and altitudes, and fuel consumption rates in air miles per pound of fuel.

By using the 9l00A for inflight data reduction and quick-look data analysis, the test engineer is able to more fully use the airplane test time, to reduce the need for repeat tests, and to make faster design decisions.

By the early 1970s, the 747s will be carrying hundreds of passengers in single leaps across oceans and continents under the bright colored marquees of such airlines as Pan Am, Lufthansa, American, SAS, United, TWA and El AI. A new era in mass air transit will have arrived. 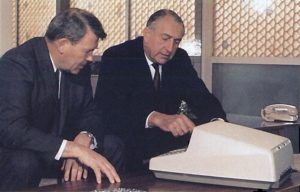